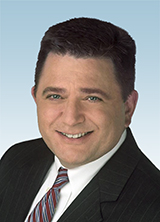 “I have been privileged to work with Hunter for the past eight years as we transition HomeTrust from a rural thrift to a full-service regional commercial bank,” said Mr. Stonestreet. “When he joined the bank in 2012, we were in the process of converting from the mutual to the stock form of ownership. At that time, we had only three lines of business and our market area was confined to western North Carolina. We now have ten lines of business, which has greatly improved our offerings and capabilities, and our market footprint has since expanded to three more states – Virginia, Tennessee and South Carolina. We also now have a presence in two of North Carolina’s growth markets, Charlotte and Raleigh. It has been Hunter’s responsibility to consistently expand the Bank and create shareholder value, while protecting and enhancing our customer experience which has been a hallmark of HomeTrust for 94 years.”

“I welcome the opportunity to lead the Bank on a continued path of growth where innovative technology and products are coupled with best-in-class personal customer service,” said Mr. Westbrook. “We have the team and operational infrastructure in place and are positioned well for the future. I sincerely appreciate the confidence that Dana and the Board have placed in me and look forward to working with them to further accelerate the growth trajectory of HTB as a leading regional community bank.”

Mr. Westbrook is a 30-year banking veteran who served as President and CEO of two community banks before joining HTB. Mr. Westbrook also worked for nearly 20 years in various senior level positions with TCF Bank and its parent, TCF Financial Corporation. He earned his Master’s of Business Administration degree from the University of Minnesota’s Carlson School of Management and holds a Bachelor of Science in Accounting & Business from West Virginia University.